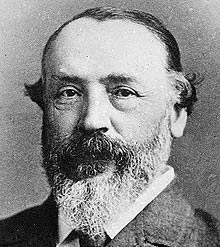 The Labouchere betting system is another popular approach used in roulette and other casino games. It is also known as cancellation or positive progression system which resembles the Martingale method but is less risky and will probably not reach the table limit too quickly. The invention of the Labouchere system is believed to be connected with British politician Henry Labouchere, a finance minister of Queen Victoria, who was fond of gambling. However, the exact origins of the system are unknown.

The Labouchere roulette system is applied for the outside even-money bets which have less risks in roulette game and bring more consistent wins. This is how it works: a player writes down a sequence of numbers which will influence the size of the bet. For example, this sequence is:

The very first bet in the roulette cycle will be the sum of the first and last numbers in the sequence above: 1+2=3. If the bet wins, these two numbers are excluded from the sequence:

The next bet will be the sum of the numbers that are now the first and last ones: 2+3=5. If there is a winning streak, the player continues crossing out the numbers and when the whole sequence is completed the player starts all over again with the same line of numbers (or it can be changed).

Every time the player loses the bet he adds the number of his first bet to the end of the sequence, in this case it will look like this (if the very first bet is a losing one):

Here is the scheme how the roulette betting amount varies with each losing and winning bet. To explain the pattern we use the following sequence of numbers: 1-2-2-3-2:

The resultant net gain of a roulette cycle of 11 bets is 7 units. It has been obtained after 6 losses and only 5 wins which looks very attractive when compared to the other betting systems.

The sequence of the numbers the player can choose is whatever he wants. However, you must remember that the longer the line and the bigger the numbers (not just 1, 2 and 3), the more aggressive the roulette gameplay is.

The idea of the reverse Labouchere betting system is very simple to understand. The player writes down a sequence of numbers of any length and bets the amount which equals the sum of the first and last numbers in the sequence. Unlike the regular Labouchere betting system, the reverse version says that the player removes the first and last numbers from the line when he loses, and adds the sum of the previous bet to the end of the sequence when a win occurs.

Back in 1966 a team of roulette players headed by Norman Leigh is believed to have beaten the bank at one of the casinos in Nice, France, using a reverse version of the famous Labouchere betting system. No one knows whether this is true-to-life story or not, however the system is still used by many players in different casino games including roulette.