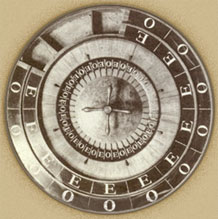 According to the history the first roulette wheel as gambling device was invented by chance by Blaise Pascal when he was trying to create a perpetual motion machine. As time went by the wheel has been modified to become the wheel we know today.

The roulette wheel game is sometimes believed to be derived from Italian Hoca game and English E-O game. Both games used a rotating wheel with special marks for players' bets and those which won bets for the casino. Obviously, E-O was the first wheel game with bets on Even and Odd which are still used in the modern roulette games.

The construction of any roulette wheel is easy to understand. It is a specially designed rotating wheel that is settled on the roulette table. The numbers from 1 to 36 alternate between small and big, black and red, even and odd. The wheel also has an extra slot of 0 and 00 (00 only in American roulette). The wheel has special pockets close to the numbers where the ball lands randomly. Let's take a look at the construction of the traditional roulette wheel and all its components: 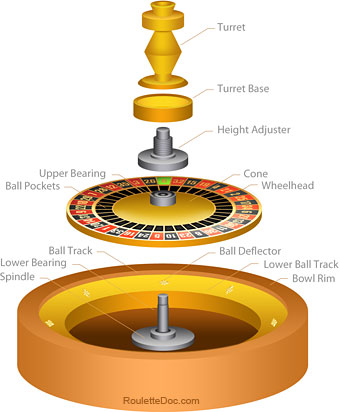 The roulette wheel itself consists of two basic parts which are a static bowl and a wheelhead which rotates in the bowl. The bowl is produced of solid wood with plastic elements or plastic coverings. The bowl assembly includes the ball track, the lower ball track apron with the special ball deflectors and a spindle for supporting the rotating wheelhead.

The roulette wheelhead is settled into the bowl in such a way that it fits with the upper and lower ball tracks. The outer edge of the wheelhead contains the colored numbers and pockets for roulette ball to land on. The central part of the wheelhead which has a conical shape is called the cone and it is used to direct the ball into the pockets. A turret is a decorative component which hides the height adjuster. In order to prevent any malfunction or defect the roulette wheel is carefully checked and tested before it is used in a casino.

The basic difference between roulette wheels used at European and American-style games is the sequence of numbers which is traditional and does not influence the game results: 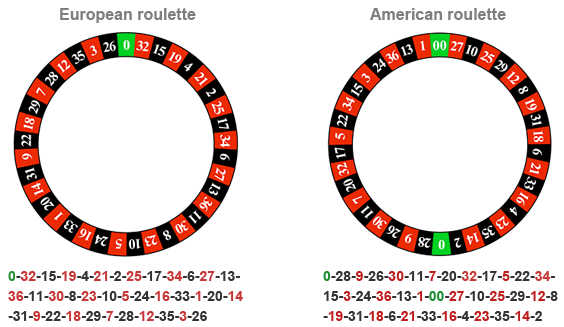 The wheel is designed to place all the red and black, even and odd, small and big numbers equally. The design is standard in every casino. The dealer rotates the wheel in one direction and rolls the ivory ball in the opposite direction. The ball eventually starts to slow down until it lands on one of the pockets in the wheel.

The first roulette ball was traditionally made of ivory bone, but today it is produced of nylon, acetal or phenolic. The material influences the bounce of the ball and that is quite important for roulette players. For example, the nylon roulette ball is very bouncy, while the ones made of acetal are less lively. If the ball quickly thuds into the roulette pocket it is probably produced of phelonic. Based on this information, the players can determine which game will be beneficial for ball landing.

According to most gambling laws, the roulette ball must have a 12/16-inch diameter. In fact, all the roulette balls never go over these parameters which are considered to be the most appropriate. It provides the optimal speed of rotating and landing into the roulette pockets.

Those players who use a prediction method in the roulette game will agree that the ball track is also very important when speaking about the outcome of each game. The traditional roulette wheel had a track with a special lip, however, the new design doesn't have the lip and this reduces the success of predicting the result by nearly 90%.

The lip on the track results in very little action of the ball after it starts slowing. The ball just quickly slips off the lip and lands straight into a pocket.

The new-style track doesn't prevent the ball from rotating around and landing at the point that is very difficult to guess. If the ball contacts the deflectors, the result is even more unpredictable.

Probably the dream of every gambler is to find a biased roulette wheel - a wheel that has some manufacturing or acquired defect that results in showing a consistent number pattern over time. This means that some numbers or a group of numbers come out more often than others. Some players hunt for the biased wheels, tracking hundreds of roulette wheels in different casinos to spot the regularities and benefit from wagering.

Wheel bias can be the result of born or wear defects. These may be the defects of pockets - some of them being bigger than the rest, or because of the deviations in the form of slots. Loosened edges between the roulette pockets are also one of the most frequent reasons for patterns in roulette results.

Due to precise technologies all roulette wheels are made equal and there are not any defects. Even if a biased wheel is placed in a casino, there is very little chance that you will notice it, as it takes too long (about 4,000 spins or more) to track any patterns and as usual the regularities in coming numbers are not so obvious. Forget about biased wheels when you play roulette online as there can't be any mechanical defects.