The roulette has been around for several centuries and has traveled all around the world to come to casinos in the form we know it now. There are different opinions of where it came from and what version was the first. Here we explain about all of them and study the full evolution of the roulette game.

The Origin of Roulette 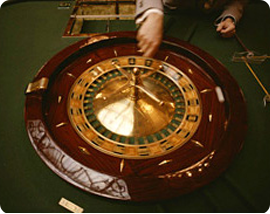 The tradition to use a spinning wheel in gaming goes back to the Greco-Roman period when Roman soldiers used to spin a chariot wheel to determine a winner. The mechanism of that "game" also included an arrow which pointed to one of 10 winning spaces on the ground. The Greeks used a shield instead of a chariot wheel but the idea of the game itself remained the same - the wheel or shield stopped and the marked space on the ground against an arrow was considered the winning one.

Roulette wheel game is sometimes believed to be a mix of two popular games:

The Hoca game was very widespread in Europe in the middle of 17th century. Even Cardinal Mazarin, the chief minister of France, opened casinos offering Hoca games with the aim of collecting money for the Treasury. The game used a circular table on which a ball was rolled. The players could bet on any of 40 cups on the table. Three out of the 40 cups marked with zero were house cups, as a result the house had 7.5% edge over the players.

Along with Hoca, the "E-O" game was played in England. It also used a circular table with 40 sections marked with "E" and "O" (meaning Even and Odd): 20 of them were marked with the letter "E" and another 20 - with the letter "O". There were also two bar spaces that won all bets for the casino. The game had quite a high house advantage but still being very popular with players.

European Roulette: Where It All Began

The history of European roulette game, which was originally called French roulette, goes back to 1655 when French scientist Blaise Pascal created it as a perpetual motion machine. The name of the game means "small wheel" in French. At first, it was just a game played in monasteries as a way of entertainment but soon after it moved to all French casinos. The game was thought to be an entertainment for glamorous and intelligent visitors.

Blaise Pascal is a famous French scientist and philosopher. He made great contributions to mathematics, geometry and physical sciences, in particular to the study of fluids, pressure, vacuum, and the construction of the first mechanical calculators. Blaise Pascal was also known as an active member of a religious movement and the author of several works on philosophy. In the gambling world, the notorious scientist is believed to be the creator of the roulette wheel, or at least the man who introduced the principles of a spinning wheel that is used today in casino roulette games.

Later on, in 1843, Francois and Luis Blanc opened the first casinos in Hamburg, German, which had the single-zero roulette game (the roulette with only one "0" slot). There is a legend that Francois and Luis Blanc traded their souls in exchange for the secret of roulette. This legend is often followed by the fact that if you add all the numbers on the roulette wheel together you get the number 666 which is the number of the beast.

In the 1860s gambling games were banned in Germany, so the Blancs moved to Monte Carlo and turned it into the real European gambling center. In Monte Carlo single-zero roulette became extremely popular and despite the fact that roulette version with extra 00 slot and higher house edge was also known among gamblers, the casinos rarely featured it.

The History of American Roulette

The late 1800's brought the game to America where it became incredibly popular among those who loved to play with luck and believed in fortune. Roulette was very popular in the days of the Gold Rush. But most casinos in the United States started offering double-zero version of the French roulette game as it was more beneficial for casino owners. Since then the single-zero French roulette game widespread in European countries has been traditionally called "European roulette" and double-zero game played in American casinos - "American roulette".

According to historians, some versions of American roulette used the numbers 1 to 28 and 0, 00 and the sign of the American Eagle. All extra pockets (0, 00 and the American Eagle) were house pockets, which means that when the ball landed on any of them the casino won all the bets on the table. The payout for any one number bet was 21 to 1.

The first Amer­ic­an roul­ette wheels were said to con­tain an ex­tra sign of the Amer­ic­an Eagle which has been al­ways the sym­bol of Amer­ic­an liberty.The Eagle was a house slot which means that the casino edge was even higher than in modern American roulette. This tradition soon vanished and all roulette wheels featured only zero house slots.

The roulette game quickly spread throughout the United Stated and underwent some modifications. As the game became a good source of income for cheaters, it was decided to change the design of the table and the roulette wheel was placed on top allowing to prevent any frauds. The table layout was also simplified and it became easier for players to place the roulette bets and for croupiers to make the payouts. Eventually, the American-style roulette layout was accepted by most casinos all over the world.

Today roulette games are found not only in land casinos and other gambling establishments but can also be played on the Internet. The first Internet casinos Gaming Club and InterCasino were launched in 1995 and 1996 correspondingly. These dates are considered as the starting point of online roulette gambling. Now along with traditional single- and double-zero roulette games, players can also win money in new variations of roulette that can be found both in real and online casinos. These are multiball roulette which is played with up to 3 balls rolled on the wheel; no zero roulette game with zero slot's missing; and mini-roulette version with a small wheel and the possibility to bet on just 12 numbers.

Today more and more players prefer to play roulette games on the Internet. And it is not surprising as online gambling has lots of advantages, some of which are:

Whichever roulette game you choose from the variety of modern variations, you can be sure that you will get real pleasure from playing one of the world's favorite games of luck.